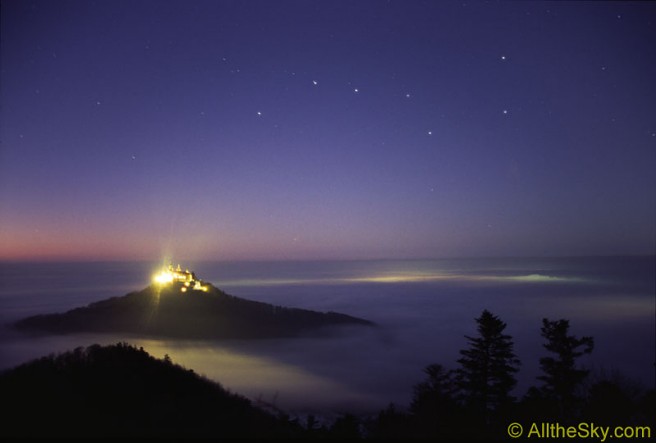 Explanation: The stars of the big dipper, a well known asterism in the constellation Ursa Major, are easy to recognize in this dramatic skyscape. In fact, northern hemisphere skygazers often follow along the line indicated by the two stars at the far right. Extending off the top of this image, that line leads to Polaris, the North Star, conveniently located near the north celestial pole. Following the arc of the dipper's handle also leads to another well known celestial beacon of the northern sky - yet this dreamlike scene takes you instead to a shining mountaintop castle. Big Dipper Castle might be an appropriate name in this stunning view, but its traditional name is Castle Hohenzollern. Poised above a sea of clouds that mute the city lights below, the castle lies in the Swabian Alb range of southern Germany, an area that was once a reef in an ancient sea.