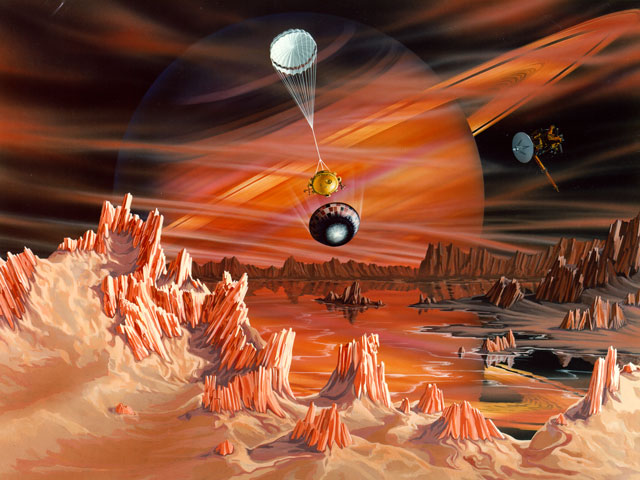 Explanation: What does the surface of Titan look like? Thick clouds have always made Saturn's largest moon so mysterious that seemingly farfetched hypotheses like methane rain and lakes have been seriously considered. Later this week, the Cassini spacecraft orbiting Saturn is scheduled to release its probe named Huygens that will actually attempt to land on the shrouded moon in early January. Sketched above is one educated guess of what Huygens might find. In the above depiction, orange hydrocarbons color a landscape covered with lakes and peaks of frozen methane and ammonia. For illustration purposes, the Huygens probe is drawn parachuting down with an oversized Cassini spacecraft orbiting above. Saturn, likely occluded by the clouds, is depicted looming in the distance. What will Huygens really find? Are the building blocks of life frozen onto the surface of Titan? Will the truth be stranger than we imagined?