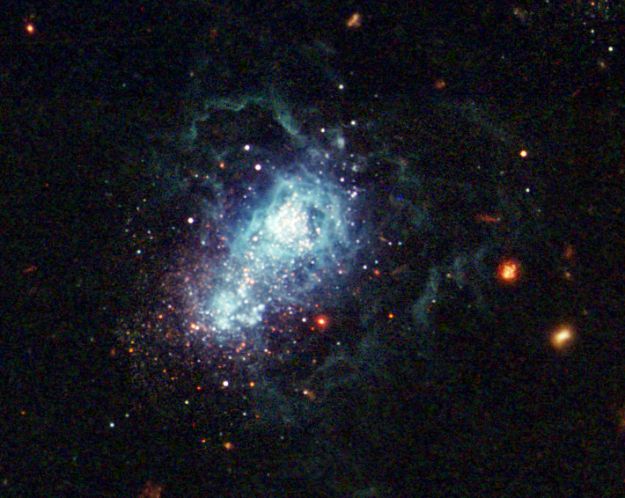 Explanation: The Milky Way is an ordinary 12 billion year old spiral galaxy, and even our middle-aged Sun is pushing 4.5 billion years. But all the stars in dwarf galaxy I Zwicky 18 are much younger. In fact, based on Hubble Space Telescope image data, that galaxy's first stars formed only about 500 million years ago, making it the youngest known galaxy. In this view, the bright knots are the two major star forming regions of I Zwicky 18, embedded in expanding filaments of glowing interstellar gas. Scattered, much older background galaxies are seen as small red blobs, and a companion galaxy lies just beyond the upper right corner of the cropped picture. Astronomers believe that diminutive I Zwicky 18 resembles the earliest galaxies formed, but also want to understand how such a young galaxy can be only 45 million light-years away - surrounded by mature galaxies in an aging Universe. The tiny galaxy itself is a mere 3,000 light-years across.