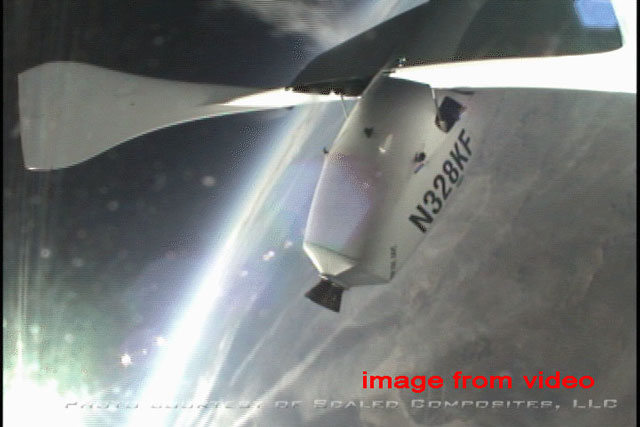 Explanation: Human space flight has entered the domain of private companies. Previously, large countries like the US and Russia have hired privately owned civilian companies to do specific tasks in support of their public human space flight programs. Yesterday, however, the solely corporate SpaceShipOne soared 100 kilometers above the Earth for the second time in two weeks to claim the coveted $10 million dollar X-Prize put forward by Ansari to inspire private space flight development. The X-prize was modeled after the Orteig prize that was designed to inspire ocean-crossing airplane flights and won by Charles Lindbergh in 1927. The impressive success of SpaceShipOne, designed by a team led by engineer Burt Rutan, could usher in a new age of inexpensive commercial space flights that includes space tourism and an increased presence of humans in space. Scaled Composite's SpaceShipOne is pictured soaring high above the Earth in a practice run last December.