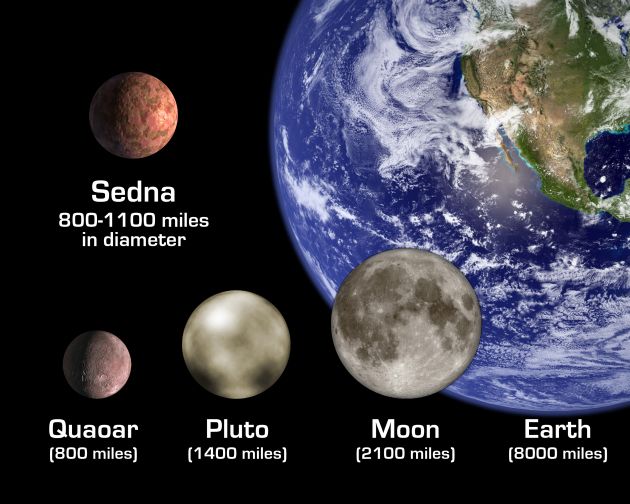 Explanation: The discovery of Sedna (aka 2003 VB12), the most distant known object orbiting the Sun, presents a mystery. Pluto's orbit averages about 40 AU in radius, where an AU (Astronomical Unit) is the Earth-Sun distance. But the closest point in Sedna's eccentric orbit scarcely comes within 75 AU, while its farthest point extends to nearly 1,000 AU. So how did something as large as Sedna get so far out there? Exploring the problem with computer simulations, astronomers Alessandro Morbidelli and Harold Levison suggest that while Sedna was not formed in its current location, it was also not moved there by encounters with other solar system objects. Instead, they find it more likely that Sedna resides in its present orbit because of an encounter with another star. In one scenario, objects like Sedna are yanked out of closer orbits by the gravitational pull of a Sun-sized star passing near the solar system during its formative years. Alternatively Sedna could have formed of material from another system entirely, captured during an early encounter with a much smaller star. Both Sedna-forming stellar encounter scenarios are consistent with idea that the Sun itself was born in an ancient, dense, cluster of stars.