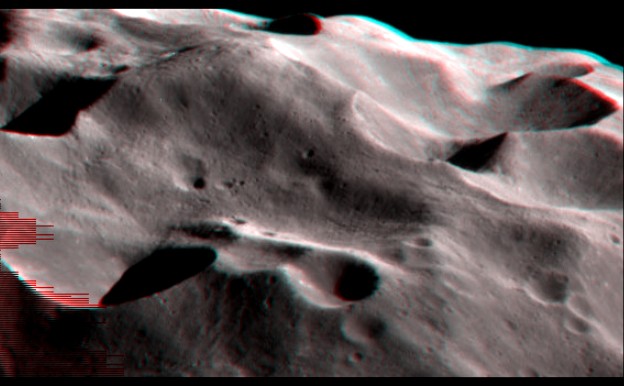 Explanation: Get out your red/blue glasses and gaze across the spectacular, cratered terrain of Saturn's icy moon Phoebe in stereo. The dramatic 3-D perspective spans roughly 50 kilometers and is based on two raw, uncalibrated images (N00004840.jpg and N00004838.jpg) from the Cassini spacecraft's narrow angle camera taken during the flyby on June 11 at a range of just over 13,500 kilometers. Phoebe itself is only about 200 kilometers in diameter. Stereo experimenter Patrick Vantuyne noted the substantial overlap in the raw image data and was able to assemble the dramatic view of the overlapping region as a red/blue stereo anaglyph. Looking for a cool project? Stereo glasses can be easily constructed using red and blue plastic for filters. To view this image, the red filter is used for the left eye.