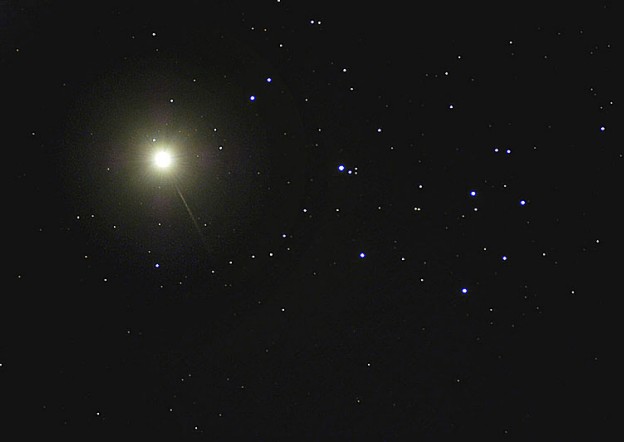 Explanation: Venus still rules the western skies after sunset as the brilliant evening star. While wandering the ecliptic with its fellow naked-eye planets earlier this month, it passed near the Pleiades star cluster, providing a striking photo opportunity for earthbound skygazers. Cataloged as M45, the Pleiades stars make for a lovely sight on their own, often shown in long exposure images immersed in hazy blue reflection nebulae. In this picture though, recorded on the evening of April 3rd, brilliant Venus closes with the Seven Sisters and overwhelms the light from the delicate cosmic clouds. The view offers a study in contrasts as Venus appears about 700 times brighter than Alcyone, the Pleiades brightest star. With Venus just over 5 light-minutes from Earth, Alcyone and the other Pleiades cluster stars are about 400 light-years distant. Formed out of the contracting nebula which gave birth to the Sun, Venus is also roughly 4.5 billion years old. The stars of the Pleiades are likely aged a mere hundred million years.