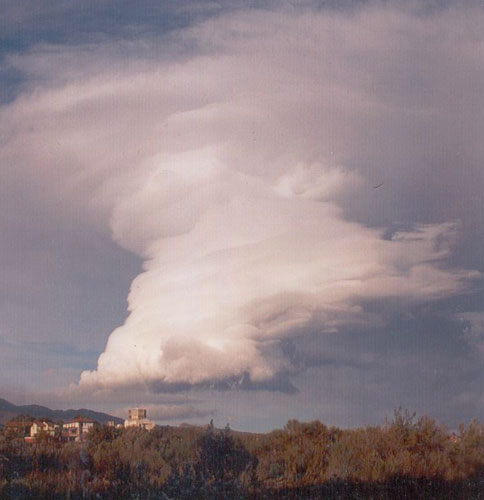 Explanation: The cloud poses no danger to the building. Appearing to float above a remote monastery in Sicily, Italy, the anvil cloud's shape shows several classic cloud features. The cloud itself is composed of millions of very small droplets of water and ice. The dramatically flat cloud bottom is caused by temperature falling in the lower atmosphere -- above a specific height water-saturated air is forced to condense out water droplets. The shape of the cloud middle is caused by the water-droplet-laden column of air being blown both upward and to one side. The anvil shape at the cloud top is likely caused by the upward air column reaching a stable atmospheric layer, likely the stratosphere, where horizontally moving air fans out the top of the cloud. The cumulonimbus cloud was captured out the front door of a house last year.