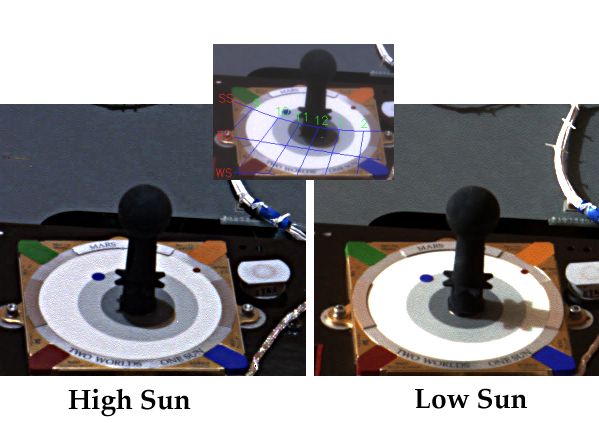 Explanation: Two Worlds, One Sun, is the legend emblazoned on the Spirit rover's camera calibration target. Resting on the rover's rear deck, it also doubles as a sundial, allowing students to determine the solar time at Spirit's landing site on Mars. Examples of the sundial or Marsdial are shown above where the left image, captured near local noon, shows the effect of the Sun high in the martian sky. The right image from later in the afternoon with the Sun lower in the sky, shows a long shadow cast by the Marsdial's 3.5 centimeter high central post. Based on the computer generated grid overlay, students determined the local time in the central inset image to be about 12:17 pm local solar time. The face of the Marsdial was designed by astronomy artist Jon Lomberg in collaboration with other team members. Did you know, the Marsdial idea was a brainchild of Bill Nye, the Science Guy? Now you know ...