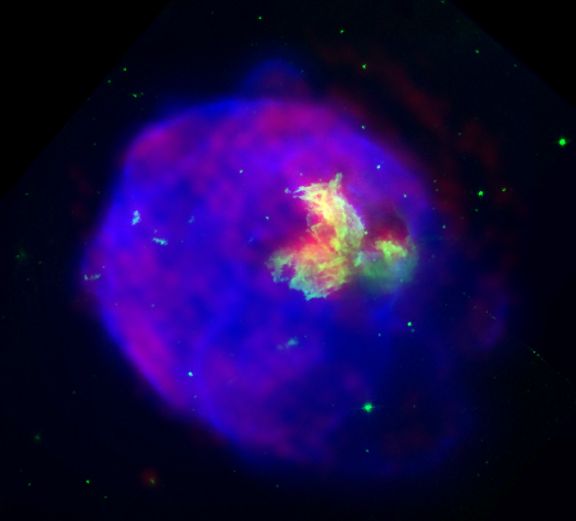 Explanation: Shells and arcs abound in this false-color, multiwavelength view of supernova remnant N63A, the debris of a massive stellar explosion. The x-ray emission (blue), is from gas heated to 10 million degrees C as knots of fast moving material from the cosmic blast sweep up surrounding interstellar matter. Radio (red) and optical emission (green) are brighter near the central regions where the x-rays seem to be absorbed by denser, cooler material on the side of the expanding debris cloud facing the Earth. Located in the neighboring galaxy known as the Large Magellanic Cloud, the apparent age of this supernova remnant is between 2,000 and 5,000 years, its extended glow spanning about 60 light-years. The intriguing image is a composite of x-ray data from the orbiting Chandra Observatory, optical data from the Hubble Space Telescope, and radio from the Australia Telescope Compact Array.