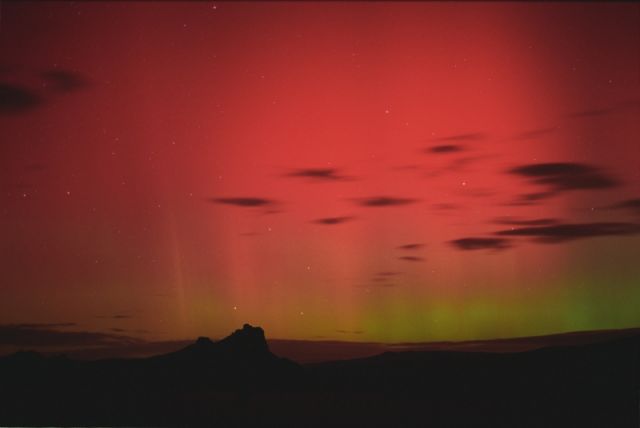 Explanation: Vivid auroral displays were triggered by a cloud of high energy particles and magnetic fields from the Sun that collided with planet Earth's magnetosphere yesterday, October 29, at about 06:30 Universal Time. The collision was anticipated, following an intense solar flare and coronal mass ejection detected on October 28, and many anxious skywatchers were rewarded with an enjoyable light show. While aurorae don't normally haunt skies in the southern United States, they were reported from locations in Missouri, Texas, New Mexico, and California in the early morning hours. Near Yampa, Colorado astronomer Jimmy Westlake also spent early yesterday morning enjoying the stormy space weather. He was impressed by this colorful apparition of the northern lights -- produced by oxygen and nitrogen atoms excited by collisions with energetic particles from the magnetosphere and returning to lower energy states, at altitudes of 100 kilometers or more. Brighter stars shine through the extreme high-altitude glow which shows much lower clouds and the distant horizon in silhouette.