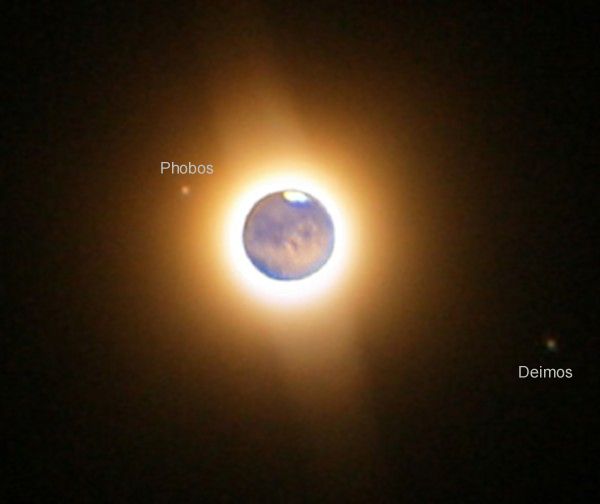 Explanation: This year's record close approach of Mars inspired many to enjoy telescopic views of the red planet. But while Mars was so bright it was hard to miss, spotting Mars' two diminutive moons was still a good test for observers with modest sized instruments. Mars' moons were discovered in August of 1877 by Asaph Hall at the US Naval Observatory using the large 26-inch Alvan Clark refractor. Recorded on this August 22nd, innermost moon Phobos and outermost moon Deimos are seen here against the planet's glare in a digital composite image. The picture consists of of a long exposure capturing the faint, city-sized moons and overexposing the planetary disk, combined with a well exposed image of the red planet, revealing dark markings on the surface and the white south polar cap. The images were taken by astronomer Johannes Schedler using an 11-inch Schmidt-Cassegrain telescope at his observatory in southeastern Austria. (Editor's note: For help finding Mars' moons, just put your cursor over the image.)