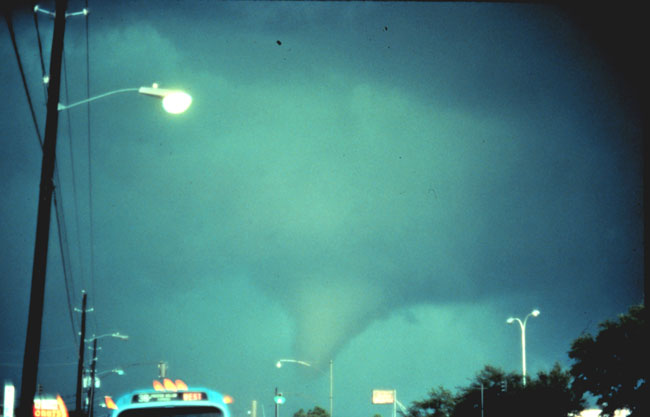 Explanation: Large storms on Earth can spawn unusual, small, violent clouds known as tornadoes. Tornado clouds swirl as fast as hundreds of kilometers per hour and, when they touch down, can destroy nearly everything in their long, narrow path. Many tornadoes last only a few minutes, but the largest and most dangerous can endure for hours. The above image, although somewhat unfocussed, appears to show a dropping funnel cloud interacting with a light pole. If so, and this interpretation is controversial, this photograph would be one of the few indicating a clear distance to the funnel cloud. The pictured tornado occurred in 1981 in Dallas, Texas, USA. Tornadoes occur all over Earth but are most commonly found over parts of central North America during spring. Much about tornadoes remains under study, including predicting when they will occur.