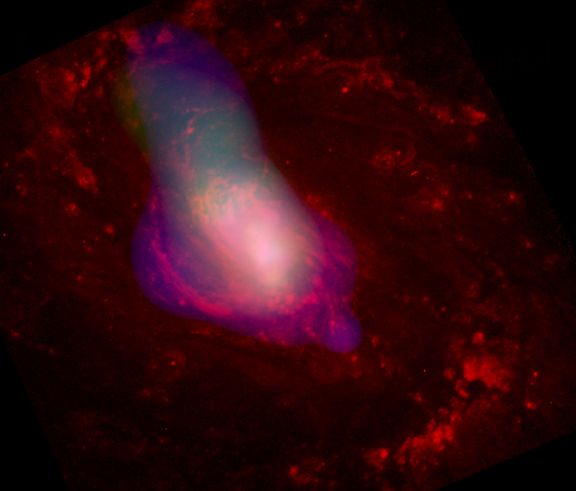 Explanation: At night, tilting a flashlight up under your chin hides the glowing bulb from the direct view of your friends. Light from the bulb still reflects from your face though, and can give you a startling appearance. Spiral Galaxy NGC 1068 may be playing a similar trick on a cosmic scale, hiding a central powerful source of x-rays -- likely a supermassive black hole -- from direct view. X-rays are still scattered into our line-of-sight though, by a dense torus of material surrounding the black hole. The scenario is supported by x-ray data from the Chandra Observatory combined with a Hubble Space Telescope optical image in this false-color composite picture. Optical data in red shows spiral structure across NGC 1068's inner 7 thousand light-years with the x-ray data overlaid in blue and green. A hot wind of gas streaming from the galaxy's core is seen as the broad swath of x-ray emission while material lit up by the hidden black hole source is within the central cloud of more intense x-rays. Also well known as M77, NGC 1068 lies a mere 50 million light-years away toward the constellation Cetus.