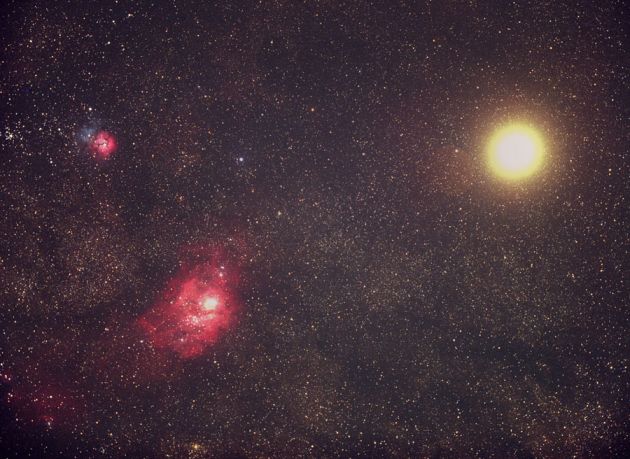 Explanation: A telescopic tour of the constellation Sagittarius offers the many bright clusters and nebulae of dimensioned space in a starscape surrounding the galactic center. This gorgeous color deep-sky photograph visits two such lovely sights, cataloged by the 18th century cosmic tourist Charles Messier as M8 and M20. M20 (upper left), the Trifid Nebula, presents a striking contrast in red/blue colors and dark dust lanes. Just below and to the right is the expansive, alluring red glow of M8, the Lagoon Nebula. Both nebulae are a few thousand light-years distant but at the far right, the dominant celestial beacon is a "local" source, the planet Mars. Just passing through Sagittarius and strongly overexposed in this picture, the Red Planet was a short 4 light-minutes away. Now headed for its closest approach to planet Earth in recorded history, Mars rises in the east southeast by midnight shining brightly at about -1.4 magnitude. Urban imager Michael Cole recorded this photograph at 3:00 AM on May 20th, 2001 in clear skies over Camp Hancock, Oregon, USA.