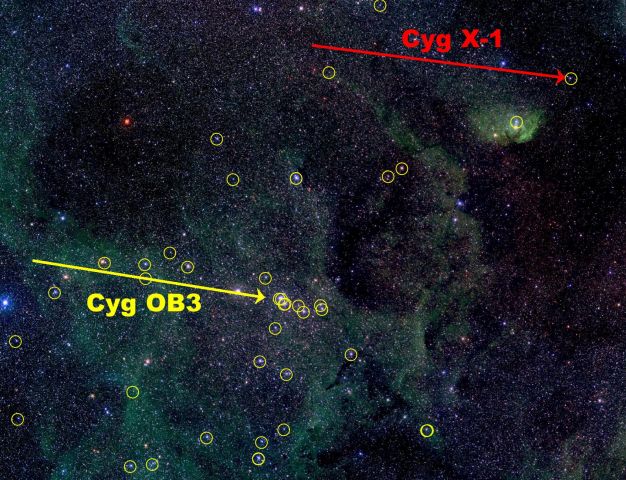 Cyg X-1: Can Black Holes Form in the Dark?
Credit: I. F. Mirabel and I. Rodrigues (IAFE, SAp/CEA)

Explanation: The formation of a black hole from the collapsing core of a massive star is thought to be heralded by a spectacular supernova explosion. Such an extremely energetic collapse is also a leading explanation for the mysterious cosmic gamma-ray bursts. But researchers now suggest that the Milky Way's most famous black hole, Cygnus X-1, was born when a massive star collapsed -- without any supernova explosion at all. Their dynamical evidence is summarized in this color image of a gorgeous region in Cygnus, showing Cyg X-1 and a cluster of massive stars (yellow circles) known as Cygnus OB3. Arrows compare the measured direction and speed of Cyg X-1 and the average direction and speed of the massive stars of Cyg OB3. The similar motions indicate that Cyg X-1's progenitor star was itself a cluster member and that its path was not altered at all when it became a black hole. In contrast, if Cyg X-1 were born in a violent supernova it would have likely received a fierce kick, changing its course. If not a supernova, could the formation of the Cyg X-1 black hole have produced a dark gamma-ray burst in the Milky Way?