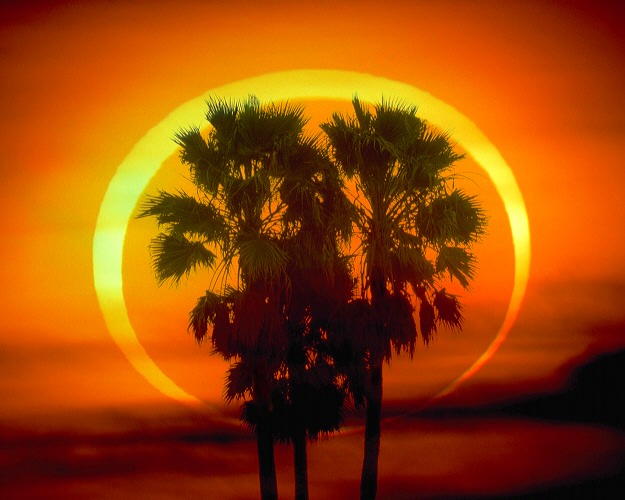 Explanation: Early on Saturday, May 31 (UT) the new Moon will once again slide across the Sun's fiery disk, and once again an annular solar eclipse will be the result -- since the Moon's apparent diameter will be a little too small to completely cover the Sun. But this time celestial geometry has conspired to produce a broad D-shaped region for viewing the annular phase that extends into the far northern hemisphere, rather than creating a thin track racing across land and sea. The characteristic ring of fire will be visible from northern Scotland, Iceland, and parts of Greenland. Otherwise a partial eclipse will be more widely visible as across Europe, along with parts of Asia and North America, the Moon will appear to take a "bite" out of the Sun. While the northerly observers might certainly expect a dramatic view, it will probably not look quite like this one, recorded with a foreground of palm trees during a 1992 annular eclipse. Want to watch Saturday's eclipse on the web? Check out the planned webcasts from Astronet.