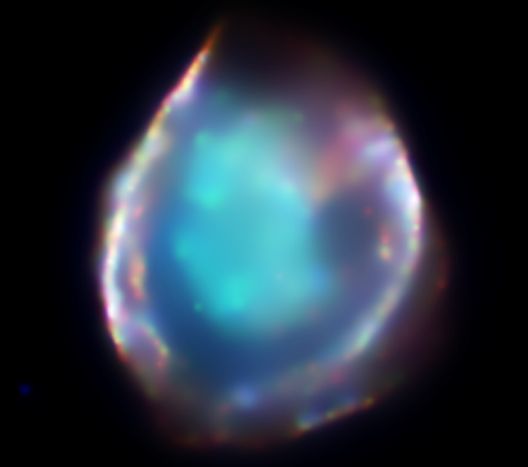 Explanation: Large, massive stars end their furious lives in spectacular supernova explosions -- but small, low mass stars may encounter a similar fate. In fact, instead of simply cooling off and quietly fading away, some white dwarf stars in binary star systems are thought to draw enough mass from their companions to become unstable, triggering a nuclear detonation. The resulting standard candle stellar explosion is classified as a Type Ia supernova and perhaps the best example yet of the aftermath is this expanding cloud of shocked stellar debris, DEM L71, in the nearby Large Magellanic Cloud. The sharp false-color x-ray image from the orbiting Chandra Observatory shows the predicted bright edges of the outer blast wave shock region and the x-ray glow of an inner region of reverse shock heated gas. Based on the Chandra data, estimates for the composition and total mass of expanding gas strongly suggest that this is all that remains of a white dwarf star. Light from this small star's self-destructive explosion would have first reached Earth several thousand years ago.