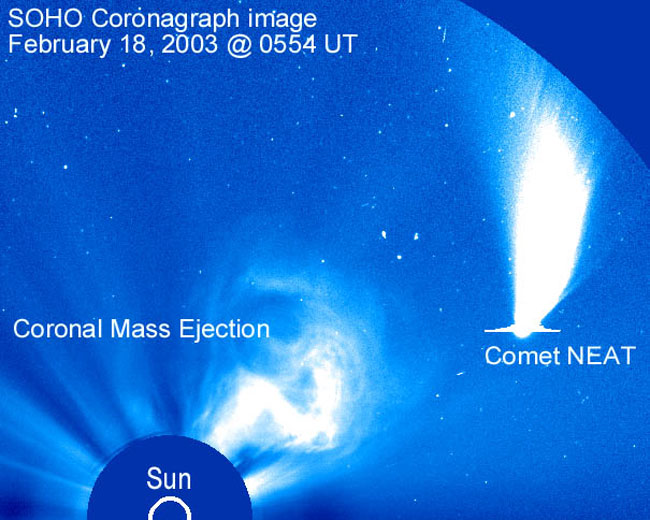 Explanation: As Comet NEAT flared last week, the Sun roared. Just as the comet swooped inside the orbit of Mercury and developed a long and flowing tail of gas and dust, the Sun emitted a huge Coronal Mass Ejection (CME). Neither the fortuitous hot ball of solar gas nor the intense glare of sunlight appeared to disrupt the comet's nucleus. The action was too close to the Sun to be easily visible by humans, but the orbiting Sun-pointing SOHO satellite had a clear view of the celestial daredevil show. The above image was taken on February 18 when the comet was so bright it created an artificial horizontal streak on the camera image. During the encounter, Comet NEAT, official designation (C/2002 V1), brightened to second magnitude. An opaque disk blocked the Sun's image. The now-outbound comet remains bright but will surely fade as it moves away from the Sun. Nevertheless, Comet NEAT will likely be visible with binoculars to southern hemisphere observers for the next month.