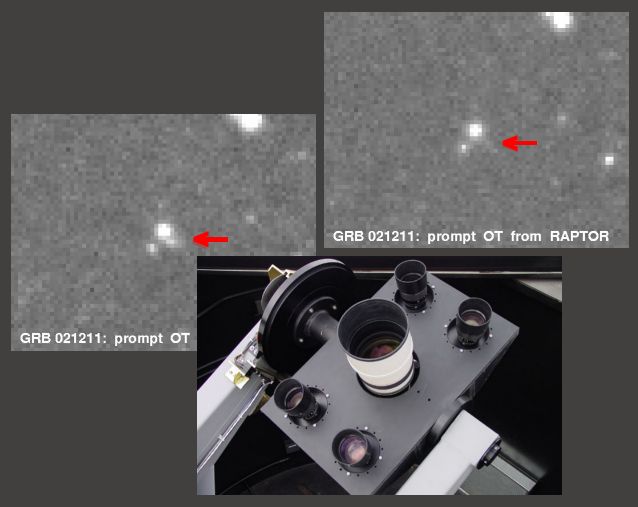 Explanation: On December 11 astronomers found one of the brightest and most distant explosions in the Universe - a gamma-ray burst - hiding in the glare of a relatively nearby star. The earliest image of the burst's visible light was caught by an earthbound RAPTOR (RAPid Telescopes for Optical Response). The two exposures inset above were taken by a RAPTOR unit about 65 seconds (left) and 9 minutes (top right) after high-energy radiation from the burst, dutifully cataloged as GRB 021211, was identified by the orbiting HETE-2 satellite. One of only two optical transients (OTs) ever found at times so close to a burst's gamma-ray emission, the fading visible light source is indicated by arrows, blended with the image of foreground stars toward the constellation Canis Minor. The RAPTOR unit (lower inset) is designed with peripheral low resolution cameras and a central, sensitive high resolution imager, in analogy with a predator's vision. In the future, the RAPTOR project expects its innovative instruments to be able to independently discover and catalog a host of cosmic things that go bump in the night.