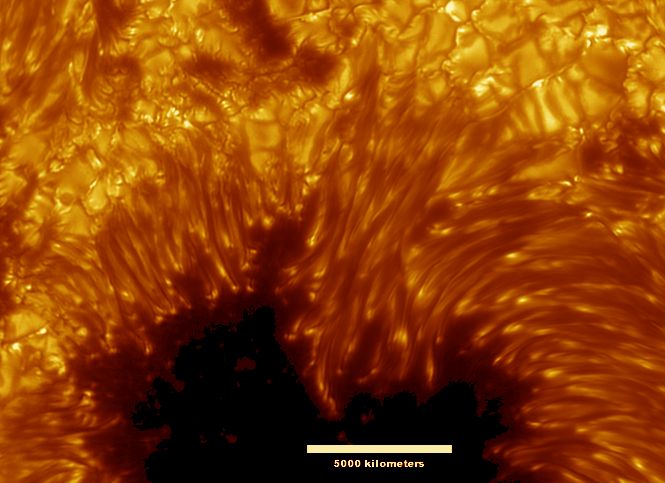 The Sharpest View of the Sun
Credit: SST, Royal Swedish Academy of Sciences

Explanation: This stunning image shows remarkable and mysterious details near the dark central region of a planet-sized sunspot in one of the sharpest views ever of the surface of the Sun. Just released, the picture was made using the Swedish Solar Telescope now in its first year of operation on the Canary Island of La Palma. Along with features described as hairs and canals are dark cores visible within the bright filaments that extend into the sunspot, representing previously unknown and unexplored solar phenomena. The filaments' newly revealed dark cores are seen to be thousands of kilometers long but only about 100 kilometers wide. Resolving features 100 kilometers wide or less is a milestone in solar astronomy and has been achieved here using sophisticated adaptive optics, digital image stacking, and processing techniques to counter the blurring effect of Earth's atmosphere. At optical wavelengths, these images are sharper than even current space-based solar observatories can produce. Recorded on 15 July 2002, the sunspot shown is the largest of the group of sunspots cataloged as solar active region AR 10030.