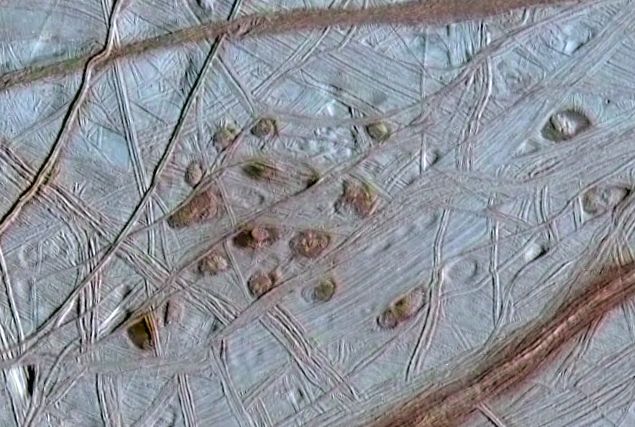 Explanation: Europa, one of Jupiter's large Galilean moons, may well possess an ocean of liquid water hidden beneath its icy surface -- and so holds the tantalizing possibility of life. In this image, constructed with data recorded in 1996 and 1997 by the Galileo spacecraft, Europa's characteristic surface ridges and cracks are seen along with domes and dark reddish spots called lenticulae from the Latin word for freckles. The freckles are about 10 kilometers across and are believed to be blobs of warmer ice from below that have gradually risen through the colder surface layers, analogous to the motions in a lava lamp. If the freckles do represent material from deeper ice layers closer to the hidden ocean, future space missions to investigate Europa's interior could sample the relatively accessible freckles rather than drill through Europa's potentially thick ice shell.