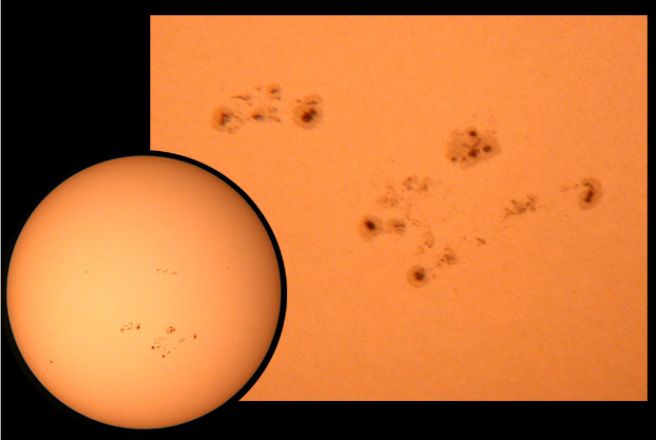 Explanation: July was a good month for sunspots ... really big sunspots. In fact, the full disk and inset pictures above show three large groups of spots, photographed only a few days ago on July 28. Together the sunspots span a region about thirty times the diameter of planet Earth. Now rotating behind the Sun's visible edge, these groups followed close on the heels of another enormous sunspot group which appeared in mid July. All of July's monster sunspot groups could be viewed without magnification, using safe solar observing methods of course. While individual sunspots are not numbered or cataloged, groups of sunspots, designated solar active regions, are given consecutive numbers as they appear on the visible solar disk. That numbering began on January 5, 1972 and on June 14, 2002, reached active region number 10,000. At the 10k mark no door prizes were given and no disasters plagued our fair solar system. But since June 14, active region reports often drop at least the leading digit, making these three active regions AR 0050, AR 0039, and AR 0044 (top left to bottom right).