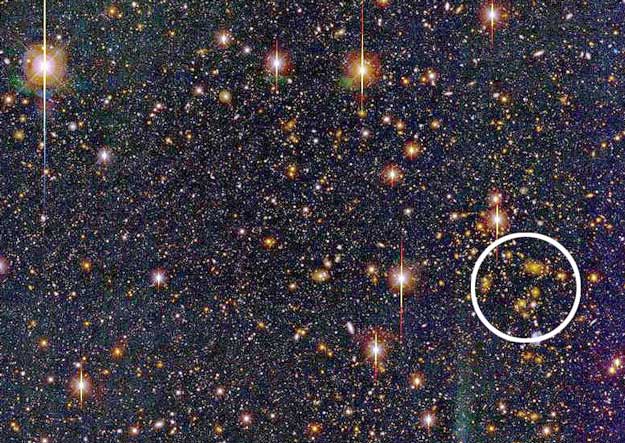 Explanation: Sometimes staring into empty space is useful. Pictured above is a region of sky that was picked because it had, well, nothing: no bright stars, no bright galaxies, and no picturesque nebulas. What could not be avoided, however, were a few stars in our own Galaxy, and many distant galaxies strewn across the universe. Now the more distant galaxies have their light slightly deflected by the gravity of more nearby galaxies, causing them to appear slightly distorted. By analyzing these gravitational lens distortions, nearby mass concentrations can be found, regardless of how bright they appear. Using this method, astronomers can now weigh entire clusters of galaxies and search for large groupings of relatively dark matter. Circled in the lower right of the above image is a cluster of galaxies that was found not by its light, but by its mass.