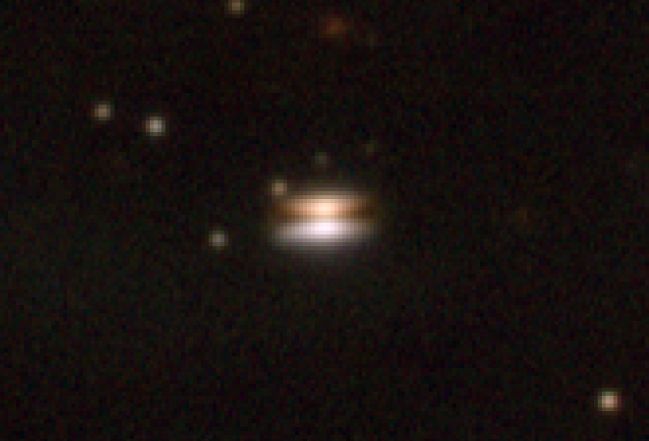 Explanation: This infant solar system was discovered posing along the lonely outskirts of the Rho Ophiuchi dark cloud, a star forming region 500 light-years from Earth. Enlarged in an infrared false-color portrait from the European Southern Observatory's Antu telescope, the dark dusty disk of planet-forming material lies edge-on, neatly dividing two small nebulae which reflect light from a hidden, youthful central star. Enthusiastically nicknamed the "Flying Saucer", the circumstellar disk is about 300 astronomical units across (1 a.u. is the Earth-Sun distance) or about 5 times the diameter of Neptune's orbit. The twin reflection nebulae have clearly different colors for reasons which still remain a mystery, but the relatively isolated neighborhood of the natal solar system is a stroke of luck. Planets should be able to develop within the dusty disk free from the destructive influence of radiation and winds from any nearby massive hot stars usually found in young star clusters.