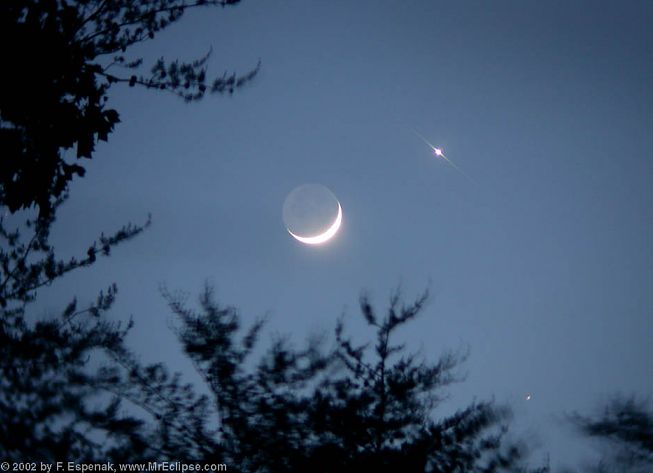 Explanation: Venus, named for the Roman goddess of love, and Mars, the war god's namesake, approach each other by moonlight in this lovely sky view recorded on May 14th from Dunkirk, Maryland, USA. The four second time exposure made in twilight with a digital camera also records earthshine illuminating the otherwise dark surface of the young crescent Moon. Venus shines as the third brightest object in Earth's sky, after the Sun and the Moon itself, and has been appearing as the brilliant evening star in the pantheon of planets arrayed in the west during April and May. Here, Venus' light is so intense that it produces a noticeable spike in the sensitive camera's image. Much fainter Mars is lower in the picture, caught between tree limbs swaying in a gentle evening breeze. By early June, Mars will be harder to spot as it wanders toward the horizon, but Venus and father Jupiter will draw closer together, presenting a spectacular pair of bright planets in the west.