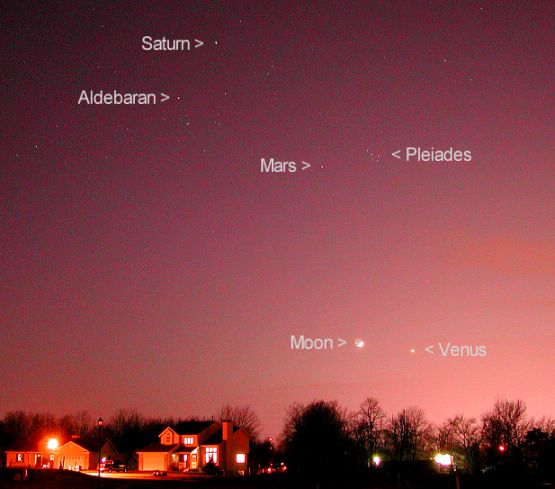 Explanation: Have you seen any bright planets lately? Chances are if you've been outside under clear skies just after sunset, then you have. Now shining in the west as bright "stars" in the night sky, are all five planets of the solar system known to ancient astronomers - Mercury, Venus, Mars, Saturn, and Jupiter. Recorded from Holt, Michigan, USA about 40 minutes after sunset on April 14th, this digital image captures three of them, Venus, Mars, and Saturn, along with a young crescent Moon. Also indicated are the Pleiades star cluster and bright red giant star Aldebaran in Taurus. Mercury, setting, is lost in the trees and glow along the horizon, while Jupiter is off the top of this view. The coming weeks will see photo opportunities galore as all five planets gradually move closer together, posing after sunset with the Moon and stars in the western sky. Venus, Mars, and Saturn will form the closest trio, drawing within a 5 degree circle (about the apparent size of your fist with arm extended) above Aldebaran by May 3rd.