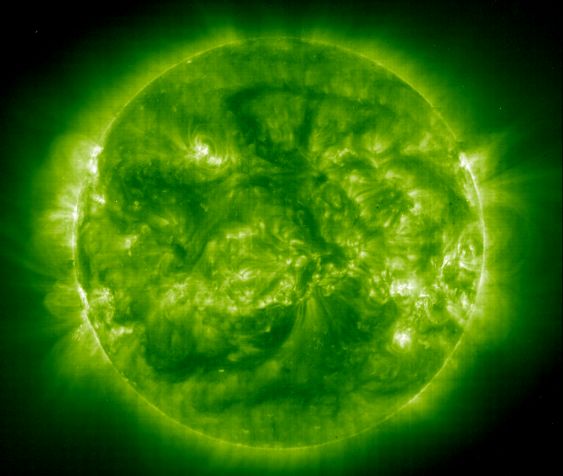 Explanation: Taken yesterday from the SOHO spacecraft, this false-color image shows the active Sun near the March Equinox, the beginning of Autumn in the south and Spring in the northern hemisphere. Recorded in a band of extreme ultraviolet light emitted by highly ionized iron atoms, the Sun's upper atmosphere or solar corona shines with an array of active regions and plasma loops suspended in magnetic fields. The bright coronal structures and loops seen here have temperatures of about 1.5 million kelvins. By chance, the Sun's earth-facing side also seems to be marked with a twisting complex of dark filament channels shaped like a giant "S". Filaments represent relatively (!) cool material in the corona which show up as prominences when seen at the Sun's edge. For planet Earth, recent solar activity has made auroral displays likely around this year's March Equinox.