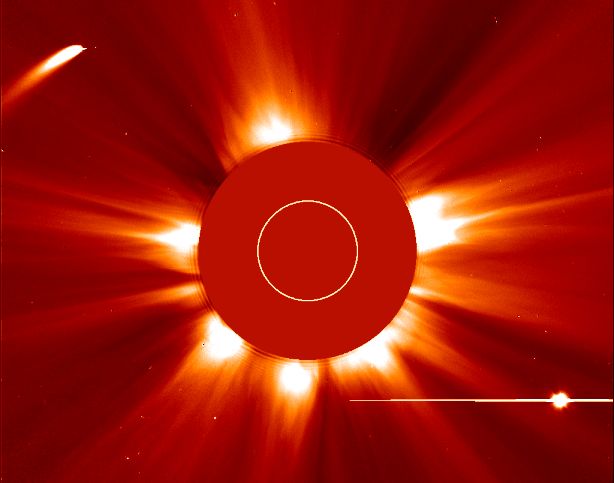 Explanation: Intense and overwhelming, the direct glare of the Sun is blocked by the smooth disk centered in this image from the sun-staring SOHO spacecraft. Taken on January 8, the picture shows streamers of solar wind billowing radially outward for millions of kilometers above the Sun's surface indicated by the white circle. Below and right is inner planet Venus, so bright that its image is marred by a sharp horizontal stripe, a digital imaging artifact. Also impressively bright is a periodic visitor to the inner Solar System, sunbathing comet 96/P Machholz 1 (above and left). This comet is definitely not a member of the more suicidal sungrazer comet family often spotted approaching the Sun by SOHO. Seen here only 18 million kilometers from the Sun (about one eighth the Earth-Sun distance) with a substantial coma and foreshortened tail, Machholz 1 has now passed perihelion and is outbound in its orbit, to return again in just over 5 years.