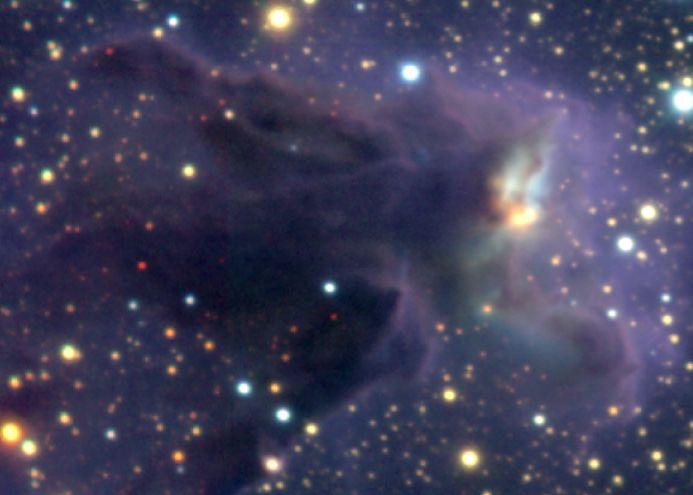 Explanation: The head of an interstellar gas and dust cloud is shown here in false-color, a near-infrared view recorded by astronomers hunting for stars within M16's Eagle Nebula. Made famous in a 1995 Hubble image of the 7,000 light-year distant star forming region, the pillar-shaped cloud's surface was seen to be covered with finger-like evaporating gaseous globules (EGGs). The near-infrared image penetrates the obscuring dust cloud's edges. But the cloud's core appears dark and opaque, even at these relatively long wavelengths. Still, this image, made with ESO's Antu telescope, reveals a massive, bright yellow star not directly detected in the visible light Hubble data. This very young star lights up the small bluish nebula with a dark, twisted central stripe, just above it. Below and to its right are several much fainter, less massive stars also not seen in visible light - newborn stars which lie within the Eagle's EGGs. These newborn stars may have already been collapsing, forming from material inside the nebula before the intense radiation from other, nearby, emerging hot stars eroded and sculpted the dramatic pillars and EGGs. In any event, as the dusty clouds are eroded away, stars still forming will be cutoff from their reservoir of star stuff. Further growth and even the development of planetary systems will likely be seriously affected.