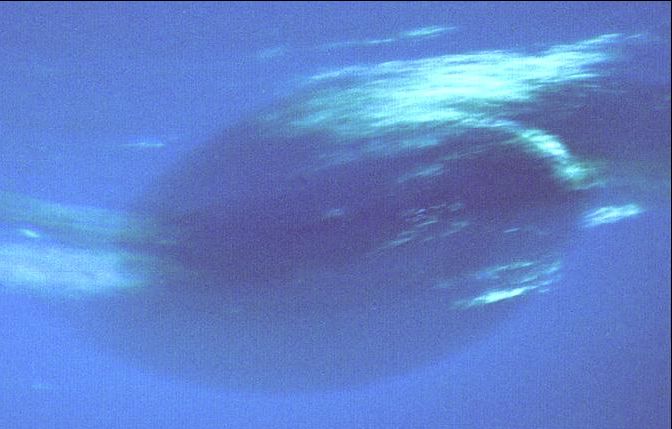 Explanation: When NASA's Voyager 2 spacecraft flew by distant Neptune in August of 1989, astronomers were shocked. Since Neptune receives only 3 percent the sunlight Jupiter does, they expected to find a dormant, dark, frigid planet. Instead, the Voyager images revealed evidence of a dynamic and turbulent world. One of the most spectacular discoveries was of the Great Dark Spot, shown here in close-up. Surprisingly, it was comparable in size and at the same relative southern latitude as Jupiter's Great Red Spot, appearing to be a similar rotating storm system. Winds near the spot were measured up to 1500 miles per hour, the strongest recorded on any planet. The Voyager data also revealed that the Great Dark Spot varied significantly in size during the brief flyby. When the Hubble Space Telescope viewed the planet in 1994, the spot had vanished -- only to be replaced by another dark spot in the planet's northern hemisphere!