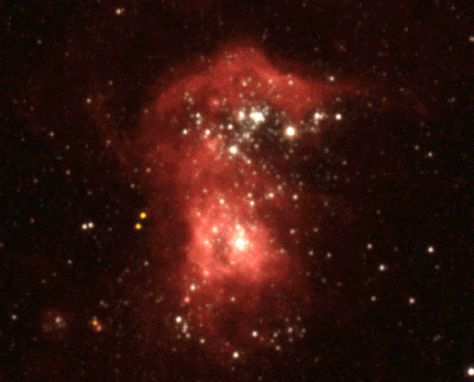 Explanation: These two clusters of bright, newly formed stars surrounded by a glowing nebula lie 10 million light-years away in the dim, irregular galaxy cataloged as NGC 2366. The Hubble Space Telescope image shows that the youngest cluster, the bottom one at about 2 million years old, is still surrounded by the gas and dust cloud it condensed from, while powerful stellar winds from the stars in the older cluster at the top (4-5 million years old), have begun to clear away its central areas giving the entire nebula an apparent inverted hook shape. Compared to the sun, the stars in these clusters are massive and short lived. The brightest one, near the tip of the hook, is a rare Luminous Blue Variable with 30 to 60 times the mass of the sun - similar to the erruptive Eta Carinae in our own Milky Way. Stars this massive are extremely variable. A comparison with ground based images indicates that in three years this star's brightness increased by about 40 times making it currently the brightest star in this dim galaxy.