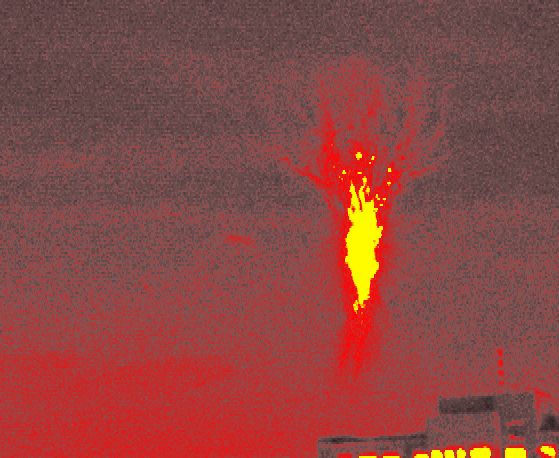 Explanation: This dramatic, garishly colored image was captured with a low-light level camera on 2001 June 7. It shows what appears to be a "burning tree" above the National Cheng Kung University campus in Tainan City, Taiwan ... but the burning tree is actually a fleeting red sprite 300 kilometers away. Red sprites are recently discovered and still poorly understood optical flashes seen dancing at altitudes of 30 to 90 kilometers above thunderstorms. Cousins to lightning bolts, red sprites occur near the edge of the atmosphere and have been glimpsed by astronauts from orbit. What ever their cause, the red sprite flashes usually last only tenths to hundredths of a second and characteristically take on shapes which researchers describe as columns, fingers, trees, or carrots.