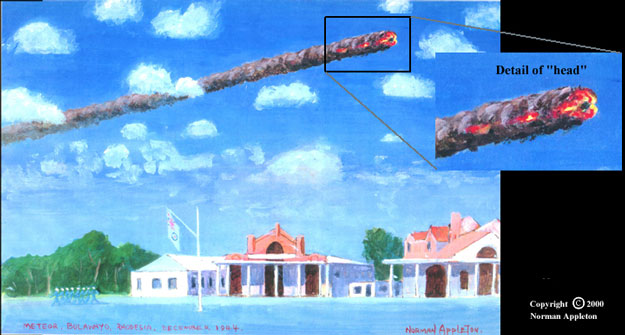 Explanation: While stationed in central Africa in December 1944, Norman Appleton witnessed a meteor so bright he remembered it his entire life. Right before his eyes a tremendous smoking fireball streaked across the daytime sky. Years later, as an accomplished member of the Guild of Aviation Artists, he recorded his memories in the above painting. Several days ago, on July 23 at 6:19 pm EDT, a daytime fireball visible from the northeast United States was reported by many personal accounts. No pictures of this event have yet surfaced, although it is quite possible that a video security camera somewhere caught it serendipitously. The bolide was likely caused by a sofa-sized rocky meteor disintegrating as it fell to Earth, an event that occurs over some unpopulated area almost every day.