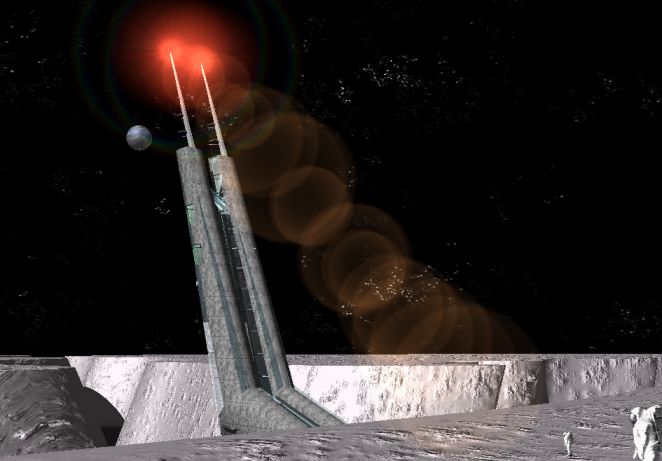 Explanation: The most detailed proposal so far for a hotel and resort destination on the Moon (!) has been prepared by Dutch architect Hans-Jurgen Rombaut. The harsh lunar environment posed serious design challenges but the Moon's low, one-sixth-Earth gravity, and the absence of wind were an architectural boon allowing a much more slender and fragile-looking building than would have been possible on Earth. Illustrated here, the structure's two 160 meter high needle-like towers soar over the rim of a deep canyon as planet Earth hangs in the lunar sky. To shield the interior, Rombaut designed 50 centimeter thick walls with two outer layers of Moon rock and a 35 centimeter layer of water held between glass planes. The water absorbs energetic cosmic rays and along with the rock helps keep the temperature constant. Windows are framed as holes in the rock layers. Construction materials are intended to be manufactured on the Moon itself. This Moon Hotel design is welcomed by the international Lunar Explorers Society, LUNEX, who hope to construct a robotic Moon base by 2015, ultimately supporting a lunar village by 2040.