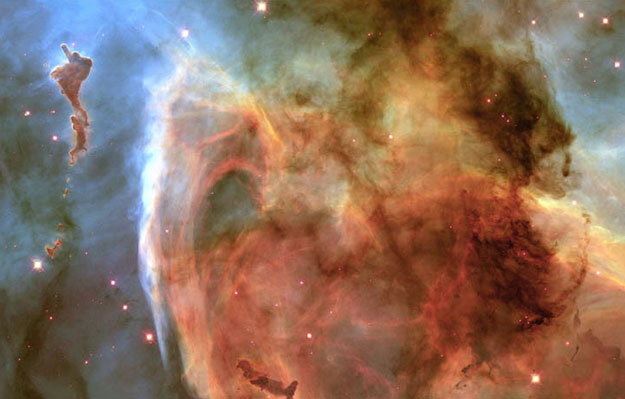 Explanation: Tumultuous clouds of the Carina Nebula, 8000 light-years away, glow in planet Earth's southern sky. Striking and detailed, this close-up of a portion of the famous nebula is a combination of exposures through six different filters taken with the Hubble Space Telescope's Wide Field Planetary Camera 2 in April of 1999. Dramatic dark dust knots and complex features revealed are sculpted by the winds and radiation of Carina's massive and energetic stars. But how were this picture's colors generated? Astronomical images produced from Hubble Space Telescope data can be composed of exposures made using relatively narrow filters which don't match the color responses of the human eye. Some of the filters even transmit wavelengths of light outside the visible spectrum. Exposures made with different narrow filters, as in this case, are translated to a visible color where shorter wavelengths are assigned bluer and longer wavelengths assigned redder colors. This color scheme represents a "chromatically ordered" way of presenting the data rather than a natural color image.