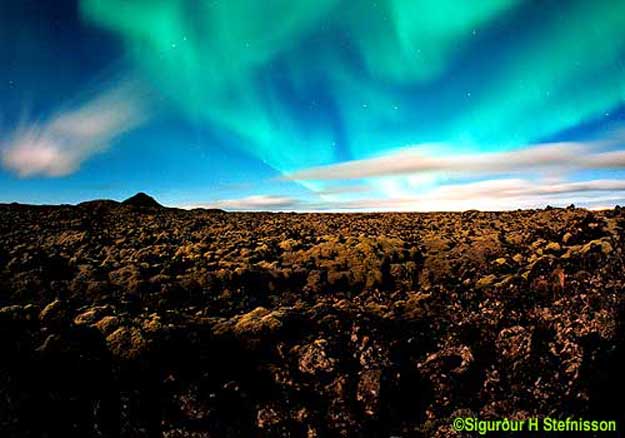 Explanation: Aurorae usually occur high above the clouds. The auroral glow is created when fast-moving particles ejected from the Sun impact air molecules high in the Earth's atmosphere. An oxygen molecule, for example, will glow in a green light when reacquiring an electron lost during a collision with a solar particle. The lowest part of an aurora will typically occur at 100 kilometers up, while most clouds usually exist only below about 10 kilometers. The relative heights of clouds and aurorae are shown clearly in the above picture from Iceland, where aurorae are relatively common. Over the past weekend, one of the largest sunspot groups ever recorded has been associated with explosive solar activity and expansive terrestrial aurora displays. Although in Earth's northern hemisphere aurorae are usually seen only in the far north, these aurorae were so prevalent they were imaged by a continuous nighttime camera operating in southern Arizona!