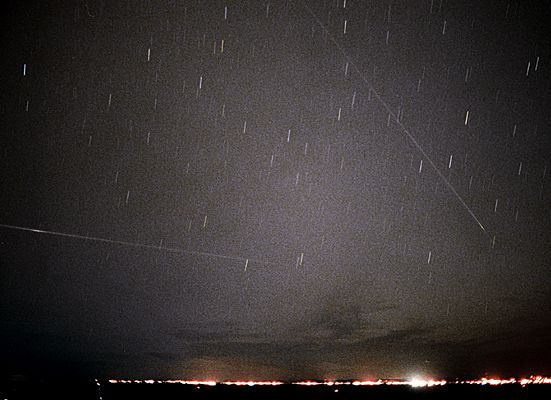 Explanation: Streaking low across the western horizon after sunset, the Russian Mir space station makes a final pass through the evening sky above the coastal city of Salvador, Brazil. In this 5 minute 20 second time exposure made with ASA 800 film and a wide-angle lens on March 19, setting stars leave short, almost vertical trails. A rapidly moving Mir travels horizontally, trailing toward the left (south) edge of the picture. Reflecting sunlight from low Earth orbit, the historic space station chanced to produce a "farewell" flare near the end of its visible track. As if in poignant response, the Hubble Space Telescope appeared in Brazilian skies within a minute after Mir's passage and also left a flare along a trail moving toward the top of the picture. Lights visible on the horizon are from nearby Itaparica Island. After 15 years in service, the long-lived Mir space station was safely deorbited today. The splashdown of its surviving pieces occurred in a remote area of the South Pacific Ocean.