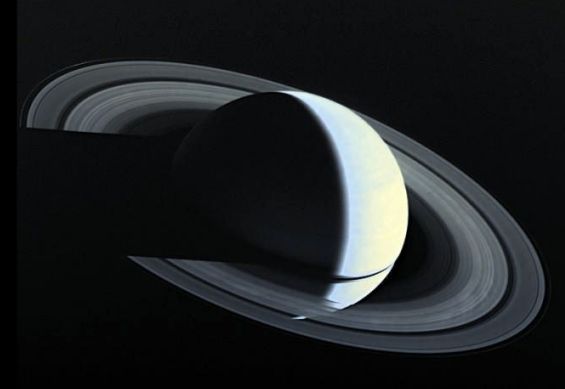 Explanation: From a spectacular vantage point over 1.4 billion kilometers from the sun, the Voyager 1 spacecraft looked back toward the inner solar system to record this startling view of Saturn's nightside. The picture was taken on November 16, 1980, some four days after the robot spacecraft's closest approach to the gorgeous gas giant. The crescent planet casts a broad shadow across its bright rings while the translucent rings themselves can be seen to cast a shadow on Saturn's cloud tops. Since Earth is closer to the sun than Saturn, only Saturn's dayside is visible to Earth-bound telescopes which could never take a picture like this one. After this successful flyby two decades ago, Voyager 1 has continued outward bound and is presently humanity's most distant spacecraft. The next spacecraft to approach Saturn will be Cassini, on course to arrive in 2004.