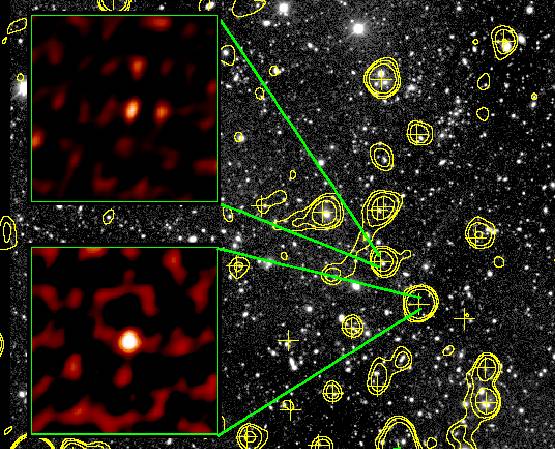 Explanation: Radio waves, like visible light, are electromagnetic radiation and radio telescopes can "see" -- their signals translate into radio images of the cosmos. While individually even the largest radio telescopes have very blurry vision compared to their optical counterparts, networks of radio telescopes can combine signals to produce sharper pictures. In fact, using an NRAO supercomputer in New Mexico, USA and technique called VLBI (Very Long Baseline Interferometry), the European network of radio telescopes (EVN) has produced pictures of distant galaxies at a resolution some three times higher than the Hubble Space Telescope. Penetrating obscuring dust, the false-color EVN radio images are inset above according to their relative location in an optical image of the famous Hubble Deep Field region of the sky. (Yellow lines superimposed on the optical image are radio intensity contours from a single telescope.) The bright cosmic radio source in the middle of each inset corresponds to a galaxy. Impressively, the radio sources appear to be so small, less than about 600 light-years across in actual size, that they are thought to be associated with massive central black holes in the distant deep field galaxies.