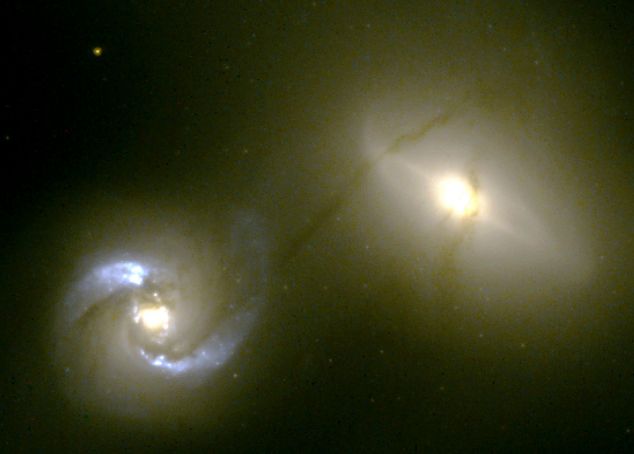 Explanation: These two galaxies are interacting in a surprising way, connected by a "pipeline" of obscuring material that runs between them over 20,000 light-years of intergalactic space. Silhouetted by starlight, the dark, dusty ribbon appears to stretch from NGC 1410 (the galaxy at the left) and wrap itself around NGC 1409 (at right). A mere 300 million light-years distant in the constellation of Taurus, the pair's recent collision has likely drawn out this relatively thin lane of material which is only about 500 light-years wide. Though the Hubble Space Telescope image dramatically illustrates how galaxies exchange matter when they collide, it also presents challenges to current pictures of galaxy evolution. The titanic collision has triggered star formation in NGC 1410 as evidenced by its blue star forming regions, yet NGC 1409 remains devoid of hot, young blue stars even though observations indicate that material is flowing into it. Bound by gravity, these two galaxies are doomed to future collisions, merging over time into one.