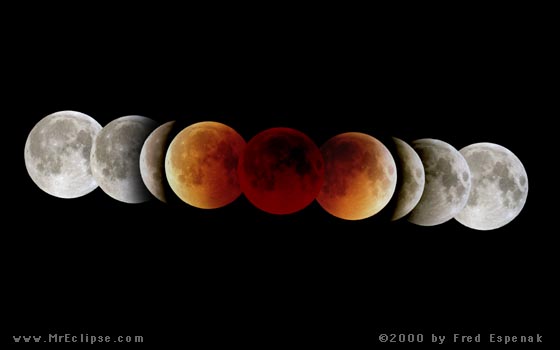 Explanation: The first eclipse of the third millennium is coming up! A total lunar eclipse mainly visible from Europe, Asia, and Africa, will occur on January 9th as the full Moon glides through the long, but not so dark shadow of planet Earth. Why not so dark? Sunlight is actually scattered and refracted into Earth's shadow by the atmosphere, a circumstance which can help create some striking photographs of the eclipsed Moon. For example, this image is a composite of photographs taken during the July 2000 total lunar eclipse. Early and late phases of the eclipse flank a deep exposure made during totality. The feeble sunlight still shining on the lunar surface gives the Moon a dramatic dark red cast. While the July 2000 eclipse was not the first or last of any millennium, it was remarkable for being the longest eclipse for about the next 1,000 years, totality lasting an impressive one hour and 47 minutes. Totality for the January 9th eclipse will last just over one hour.