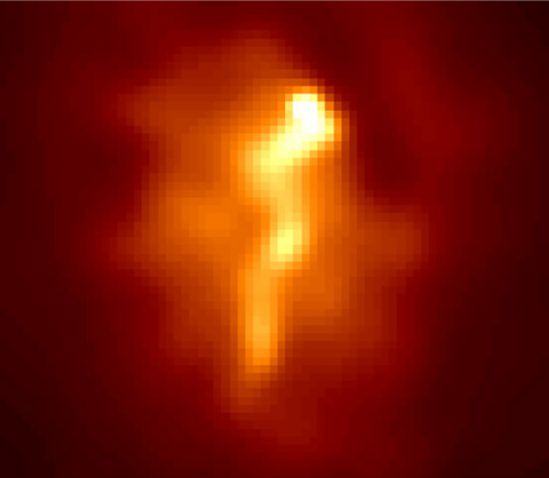 Explanation: Throughout the Universe, galaxies tend to swarm in groups ranging from just a handful of members to casts of thousands. Astronomers have realized since the early 1970s that the larger swarms, immense clusters of galaxies millions of light-years across, are immersed within tenuous clouds of hot gas which glow strongly in x-rays. These clouds may have been heated by their collapse in the early Universe, but in many galaxy clusters, the gas appears to be cooling. This Chandra Observatory x-ray image reveals a striking cooling flow in the central regions of the galaxy cluster cataloged as Abell 1795. Brighter pixels in the false-color image represent higher x-ray intensities. The bright filament down the center indicates gas condensing and cooling -- rapidly loosing energy by radiating x-rays. At the very top of the filament is a large, x-ray bright galaxy. As it moved through the cluster gas cloud, the massive galaxy's gravitational influence seems to have created this cosmic wake of denser, cooling gas. Continuing to cool, the cluster gas will ultimately provide raw material to form future generations of stars.