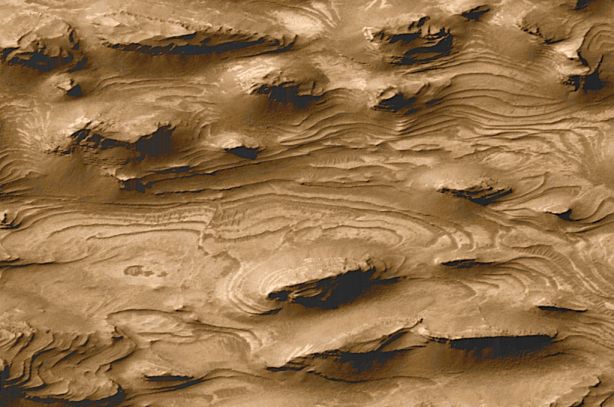 Explanation: Pictured above, layers upon layers stretch across the floor of West Candor Chasma within the immense martian Valles Marineris. Covering an area 1.5 by 2.9 kilometers, the full image from the Mars Global Surveyor spacecraft shows over 100 individual beds. Each strikingly uniform layer is smooth, hard enough to form steep edges, and is 10 to 11 meters thick. In a press conference yesterday scientists Michael Malin and Ken Edgett presented this and other new images which show that the layered patterns exist at widespread locations near the martian equator. Their results indicate that some of the layered regions may be 3.5 billion years old. On planet Earth, layered patterns like these are formed from sediment deposited over time by large bodies of water. Likewise, the layered beds on Mars may be sedimentary rock formed in ancient lakes and seas. The researchers caution, however, that other uniquely martian processes may be responsible for the layering. Did life arise on ancient Mars? Because of their possible association with water, a prime location for future searches for fossil remains of martian life would be within these layers of Mars.