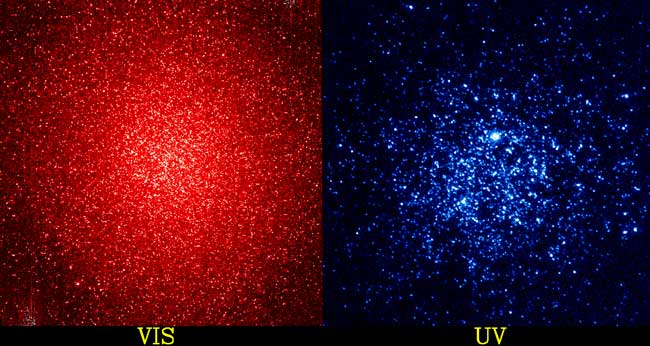 Explanation: Does an old, red globular cluster have any hot, blue stars? The rightmost picture, taken by the Ultraviolet Imaging Telescope in ultraviolet light, shows that indeed it does. Pictured, Omega Centauri is the largest known globular cluster of over 200 in our Galaxy, containing well over a million stars. Many of these stars are evident in the visible light photograph on the left. When photographed in ultraviolet light, however, different and less numerous stars emerge, as evident on the photograph on the right. Most of these stars are thought to have evolved past the current stage of our Sun. These stars no longer fuse hydrogen to helium in their core but rather fuse helium into carbon. These stars will soon shed their outer envelopes and end up as smoldering carbon embers known as white dwarf stars.