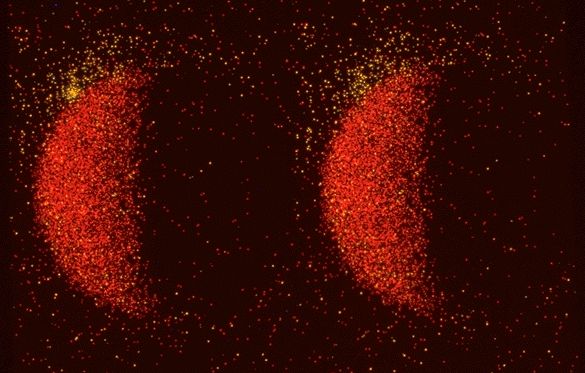 Explanation: An x-ray star winks out behind the Moon in these before (left) and after views of a lunar occultation of the galactic x-ray source designated GX5-1. The false color images were made using data from the ROSAT (ROentgen SATellite), orbiting observatory. They show high energy x-rays in yellow (mostly from GX5-1), and lower energy x-rays in red (the Moon reflecting x-rays from the Sun). GX5-1 is a binary system consisting of a neutron star and a companion star in mutual orbit about the system's center of mass. The gas in the companion star's outer envelope falls toward the neutron star and accumulates in a disk around it. This disk material swirls deeper in to the neutron star's gravitational well, and is finally dumped onto its surface - in the process creating tremendous temperatures and generating the high energy x-rays.