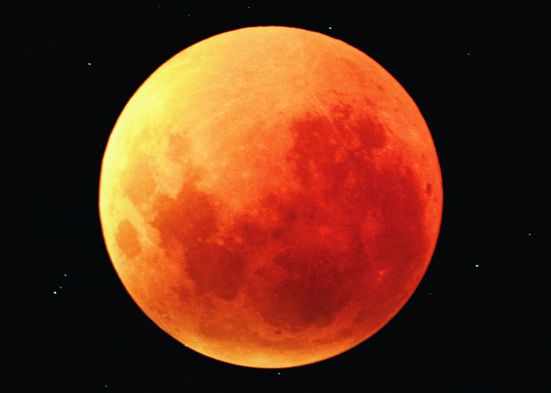 Explanation: As the Moon passed almost directly through the center of Earth's shadow on July 16th, sky gazers in the Pacific hemisphere were graced by a lingering lunar eclipse. The total phase lasted 1 hour and 47 minutes, the longest since 1859. A longer total lunar eclipse won't occur until the year 3000. Taking advantage of the lengthy totality, astronomer and photographer, Noel Munford used a small telescope to record this colourful picture of the eclipsed Moon and nearby stars in the skies above Palmerston North, New Zealand. Near the top in this southern hemisphere perspective is the 84 kilometer wide bright ray crater Tycho. The Moon looks red even when it lies completely in shadow because it is still illuminated by sunlight reddened by dust and refracted by the atmosphere along the Earth's limb. Changes in atmospheric dust content mean that each eclipse can have a different appearance. An experienced observer, Munford comments that at mid totality this eclipse had a more uniform, delicate, subtle colour and was one of the lightest he has seen.