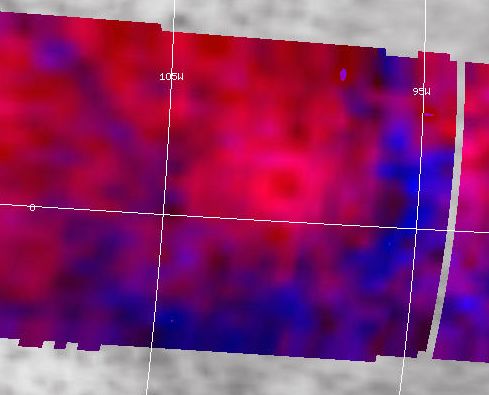 Explanation: Impact craters are common on Earth's moon but on Jupiter's large ice moon Europa, they are very rare. Over time, both bodies have been subjected to an intense pounding by the solar system's formative debris, but geological activity on Europa's surface seems to have erased most of these impact scars. This false-color infrared image from the Galileo spacecraft's NIMS instrument shows a newly discovered crater on Europa as a light red ring feature near center surrounding a dark core. For scale, the dark core is about 29 kilometers in diameter. Only seven comparably large craters have now been identified on Europa's surface. Red colors in the image represent a relatively pure water ice composition while blue colors indicate that other minerals are present. The crater's central dark area may contain the remnants of the impacting body. The icy crust of Europa is of great interest, as evidence mounts that it covers an ocean of liquid water, possibly providing suitable conditions for life.