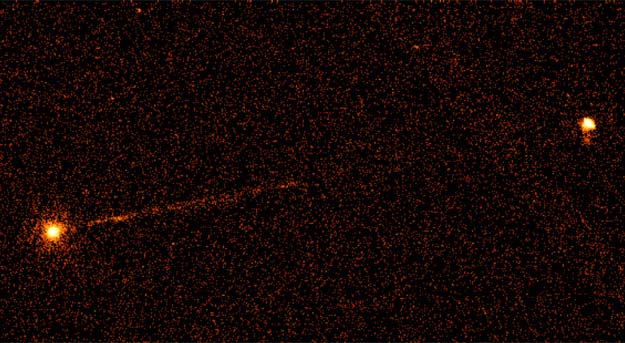 Explanation: A jet stretching nearly a million light years has been imaged emanating from galaxy Pictor A. The thin jet of electrons and protons shoots out at nearly light-speed likely from the vicinity of a large black hole at the galaxy center. At the left of the above image in X-rays is the radio galaxy Pictor A, known as a radio galaxy for its strong radio emission. At the far end of the jet on the right a hot spot glows as the intense particle beam bores through a gas cloud in intergalactic space. The jet and hot spot of Pictor A had been seen previously in radio waves, but only recently has the orbiting Chandra X-ray Observatory confirmed its unusual power.