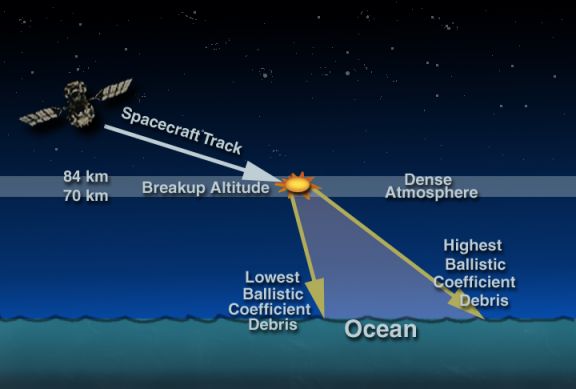 Explanation: Nine years ago the massive Compton Gamma Ray Observatory, the second of NASA's space-based great observatories, was deployed in low earth orbit. Lofted above the protective atmosphere, Compton's instruments could explore the extreme high-energy Universe in gamma rays -- photons with 100,000 times or more the energy of visible light. The premier gamma-ray observatory far exceeded expectations for a two- to five-year mission, but a recent gyroscope failure has prompted NASA to decide to steer the satellite safely back into the atmosphere. Illustrated above, the controlled re-entry will occur early tomorrow, June 4th, in a remote area of the Pacific Ocean, approximately 2,500 miles southeast of Hawaii. The re-entry location, the largest area (about 10 million square miles) devoid of any populated land available for the observatory's re-entry, was selected to virtually eliminate the risk of human casualty. Compton's lasting legacy of discovery will include the detection of more than 400 celestial gamma-ray sources, 10 times more than were previously known; and more than 2,500 gamma-ray bursts.